Many of you know that we are scheduled to officially open our Cape Cod Inn on May 27, 2010 for Memorial Day weekend.  We just had an unofficial opening with a couple of very special guests.  About 6 weeks ago a movie producer stopped by our Inn to see our renovations and request if we would be able to accomodate a couple of actors for a short film he was producing in May.  We told him we were officially opening the bed & breakfast Memorial Day weekend but we felt that we could open early for his guests.  We are very pleased to let you know that we hosted two wonderful guests over the past four days.  Mr Robert Vaughn and Ms. Melissa Errico McEnroe.  What talented and lovely people.  We thoroughly enjoyed being their home away from home and listening to them practice their lines for the upcoming film “Patrimony” which we understand is scheduled to be premiered at 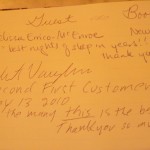 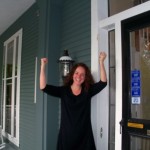 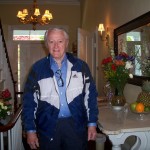 Robert - What an incredible career and nice person!

the Sundance Film Festival next January.  Read a Playbill story on the movie: