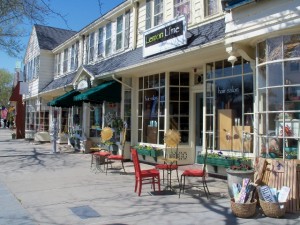 The Red Chair has continued on its journey of a Better Way to Stay in Cape Cod and has arrived at The Captain’s Manor in in Falmouth.  What a wonderful time visiting some of Cape Cod’s great landmarks including lovely Inns , museums, eateries, beaches, and quaint villages such as Falmouth Village’s main street.

What I found as we chaperoned the chair is that it is famous !  When we went over to the Queens Buyway shops a local bicycle rider yelled out “Is that THE red chair” and we were happy to reply it sure is!  The next stop was Ben & Bill’s Chocolate emporium where one of the staff made a point of going to get the local paper and show the rest of her co-workers the article that had been written.  I had no sooner arrived at Highfield Hall and was taking the chair out for its picture in the sunken garden when two of my favorite people from the Hall, Janet and Pat,  came out and said they were just taking about the Red Chair the other day and saying wouldn’t it be great if it made a visit here.  Off to the Visitor Center where the cry went out “The Red Chair is here”.  My personal favorite was after taking some great shots over at the Nobska Lighthouse a gentlemen made a point of jogging over from across the street saying he just had to see what the fuss was about with THE Red Chair.

Some of our favorite pictures were at the Nobska Lighthouse and Highfield Hall.  Also check out our full gallery of pictures on facebook and our movie on youtube. 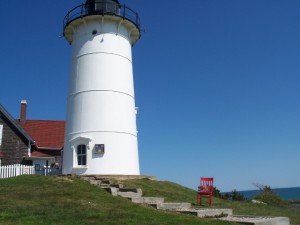 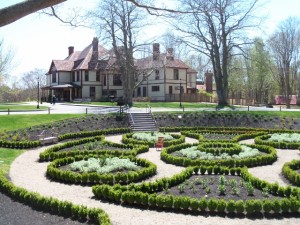