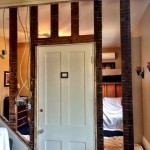 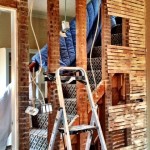 New Suite Construction is underway at Captain’s Manor Inn and we couldn’t be more excited! We have been planning this romantic suite for sometime and we are now in full swing.

UPDATE – Since our original post December 29th we have some new photos to share. The electrical has been moved, the insulation of the new walls is complete, sheetrock has also been done. It is really starting to come together. This week the plaster work should be complete. The carpet is ordered and the new King bed is ready to be set up as soon as we finish painting and trim work.

The half wall is done

The Forbes room which was named after Henrietta Forbes (for whom the Inn was originally built by her fiancé Captains Albert Nye) will be combined with the 3rd floor cupola to create a 2 story suite here at the Inn.

The Inn has such a wonderful history. In fact the cupola on the top on the Inn was once known as the observatory as told in the brief story below.

Captain John Robinson Lawrence purchased the property from the original owner, Captain Nye, in 1872. Captain Lawrence was a retired whaling captain turned businessman who maintained deep roots in the Falmouth community.   He raised his family here and his son H. V. Lawrence left a significant legacy to the Inn.     H. V. became a well known horticulturist and the first florist on Cape Cod.  The grounds of the Inn bear witness to his talents with many unique trees that survive to this day.  H. V. lived in the home until his death at the age of 92 in 1953.
The cupola atop the Inn was known in earlier times as the observatory as it once gave a commanding view of Vineyard sound.  As a boy, Milford Lawrence – son of H.V., had a wireless set in the observatory that he used to speak to the ships he could see passing up and down the sound. 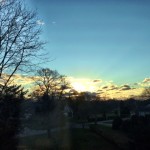 You can experience a bit of that history in the new suite even though you can no longer see Vineyard Sound due to all the tree growth over the past 100+ years. You will see some beautiful sunrises and sunsets as well as a view of the Village Green.

Follow our progress on construction and enjoy these early pictures.

Looking for a very unique romantic getaway …. cape cod and the Captain’s Manor Inn’s new Forbes Cupola Suite may be just what you are looking for.