Provincetown’s towering Pilgrim Monument commemorates the first landing site of the Mayflower with the tallest all-granite structure in the United States. It’s also home to the Provincetown Museum.

There’s nothing quite like the view from atop the Pilgrim Monument on Provincetown’s waterfront.

The 252 foot high tower, patterned after the Torre Del Mangia in Siena, Italy, was built between 1907 and 1910. Climbing the 116 steps and 60 ramps to the top takes about ten minutes. One of the best views on the Cape – 350 feet above sea level! – will reward you for your efforts.

The memorial celebrates more than the Mayflower’s first landing on November 11, 1620. It also commemorates the writing and signing of the Mayflower Compact, which established the law of the new land. The Pilgrims explored the area for 5 weeks before sailing on to Plymouth.

History of the Monument

Work on the Pilgrim Monument began in 1892 when the Cape Cod Pilgrim Memorial Association was formed. Thanks to the work of this organization, Cape Cod’s oldest not-for-profit, the push for a memorial was successful.

President Theodore Roosevelt commissioned the tower and laid the corner stone in 1907. Organizations and communities from all over the country donated stones for the tower’s interior. Should you venture a climb, be sure to keep your eye out as you may see your hometown represented! 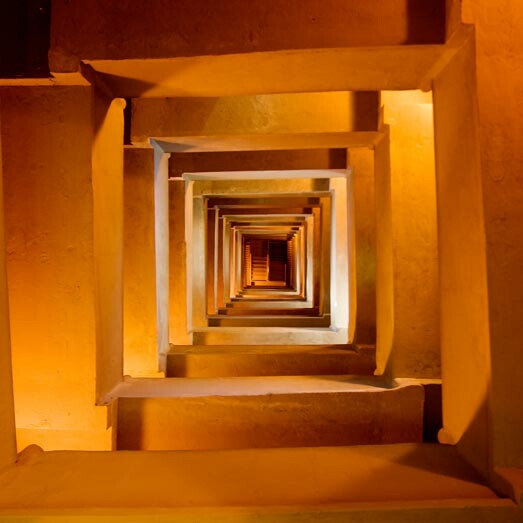 Looking up inside the Pilgrim Monument

The Provincetown Museum is located at the base of the Pilgrim Monument and features a number of related exhibits. It was the very first building built on the Cape specifically to house a museum.

Permanent exhibits within include the arrival of the Mayflower pilgrims, Provincetown’s maritime history, and the building of the monument. Large scale dioramas depict the Mayflower Compact being signed, a 19th-century sea captain’s cabin, and more.

Other attractions include a fire engine, built in the 1830s by an apprentice of Paul Revere, artifacts of the Wampanoag tribe, and an exhibit on the early days of modern American theater.

The Pilgrim Monument and Provincetown Museum

One of the best times to visit is during the Annual Lighting. This event lasts from November through early January and sees the Monument decorated in more than 3,100 lights. The Lighting date for 2020 is November 11.

Captain’s Manor Inn is a romantic Cape Cod Bed and Breakfast located in Falmouth Village. Choose from 7 guestrooms with private baths, enjoy our Café refreshments, and relax on our 2000 square foot, wrap-around veranda. Let us help reveal the wonders of Cape Cod for you. Book your stay at The Captain’s Manor Inn today!